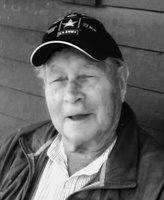 Rishel “Rick” White, 95, longtime resident of Adams, died Thursday morning at his home. A memorial service will be 2:00 pm Wednesday at the Piddock Funeral Home, Adams, with Rev. N. Bud Masters officiating. Burial with Military Honors will be in the Maple View Cemetery, Maple View, NY. Calling hours will precede the funeral beginning at 12:00 pm. Born October 31, 1921 in Wharton, West Virginia, he was one of five brothers and three sisters born to parents Ellsworth and Bessie Mae White. Following his graduation from Van High School in Van West Virginia, he worked locally before joining the U.S. Army in 1941. At the beginning of World War II, Rishel was attached to the 1st Armored Division at Fort Knox Kentucky before being sent on a cadre to Pine Camp to form the 4th Armored Division in 1942. He contracted Rheumatic Fever and was hospitalized for months becoming dis-attached from the 4th Armored. While in the North Country he met Adams resident Shirley Weeden and they married in Columbia, South Carolina in 1943, where he was sent by the Army to form the 106th Infantry Division at Fort Jackson. His division was sent to Europe where it was caught in the German counter-attack of 1944 known as The Battle of the Bulge in the Ardennes forest region of Belgium. He was captured by German forces and spent a harrowing five months as a POW in Stalag 4B near Dresden in Germany. Liberated by Russian forces moving west, he again survived a week-long trek back to the American lines, and spent the next 10 months in hospital, first in England, then at the Greenbrier Resort in West Virginia. It was here he met his brother Mondell, who had been captured by the Japanese in the Philippines in 1942 and had survived the war after having been moved to Japan. Rishel was discharge in 1946, and came back to the North Country and worked a number of jobs including the Sears Roebuck store in Watertown before starting as a civilian worker at Fort Drum in the supply warehouse, retiring in 1983. His wife Shirley, a former Adams Librarian, passed away in December 2005. He is survived by two sons, Michael E. (Jane) White, Watertown, and R.D. White, Sackets Harbor; three grandchildren Matthew A. White (wife Hinda Mandell), Pittsford NY, Sarah J. White, Champlain College in Burlington VT, and Amanda Vecchio (White), Watertown; five great grandchildren; one brother and sister in law Harry Readith “Reedy” and Lavonne White, Henderson; and many nieces and nephews. His three brothers, Pershing, Mondell, Bill, and three sisters Marina May, Imogene, and Ina Grace all predeceased him. Rick was a well-known character about town in Adams known for his practical jokes, jovial manner and greeting everyone with “Hey, Partner”. He enjoyed hunting, playing softball, horseshoes, and was an avid poker player He was a member of the Don Rounds Post 586 American Legion, South Jefferson Memorial VFW Post 5344, Ex POW Organization and the Battle of the Bulge Prisoner Group. In lieu of flowers, donations may be made to the SPCA of Jefferson County, 25056 Water St., Watertown, NY 13601