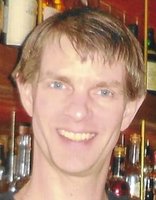 Christopher C. Reed, 51, formerly of Adams, passed away May 3, 2020 in New York City after a long battle with ALS. He is survived by his wife, Jennifer Dillon of New York City; mother, Marcia A. Reed of Adams, NY; sister, Tonya A. Reed of Fayetteville, NY; brother and sister-in-law, Scott D. and Catherine Reed of Elkridge, MD; a niece Sophia and two nephews, Bennett and Max. He was predeceased by his father, Frank in 2005. Born on February 22, 1969, Chris was a member of the Adams United Methodist Church. He attended South Jefferson Central School where he graduated in 1987. Chris went on to attend Oswego State, were he studied Computer Science and Drama. His journeys in life took him to Los Angeles, CA, Wilmington, NC, Baltimore, MD, and finally, NYC, where he found everything he was looking for in life with his wife, Jennifer. Chris worked for Kenta Goto at Bar Goto in Manhattan. Kenta established a GoFundMe campaign for Chris, and the Industry in NYC rallied to support him. His family will forever be grateful and awed by the love and generosities displayed by Kenta, the Industry, friends, family, and people who never had the privilege to meet Chris, but were inspired by his story. Chris enjoyed life and all the simple things in it. He relished “date nights” with his wife, and quiet times with a good book. Chris appreciated time spent with friends, co-workers, and family, and never missed an opportunity for a good laugh. He always looked forward to trips back home to Adams, where he was able to relax and enjoy time with family and friends. Chris was diagnosed with ALS on May 7, 2018. He vowed that he would defy the odds. He handled his diagnosis with dignity and determination, and fought hard to increase awareness for ALS. Chris continued to remain positive and hopeful as the disease sabotaged the use of his speech, legs, hands, and eventually his ability to walk. A “Celebration of Life” will be held at a later date. Donations may be made to the Adams United Methodist Church, P.O. Box 51, Adams, NY 13605. Arrangements are with the Piddock Funeral Home Inc, Adams, NY. Condolences may be made at www.piddockfuneralhome.com