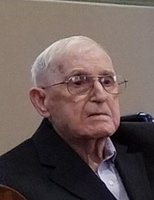 George E. Bibbins, 95, long time resident of Pinckney, died Thursday morning July 9, 2020 at Samaritan Keep Home, Watertown, where he had resided since September 2018. Calling hours will be at the Piddock Funeral Home, Adams on Monday at 2:00 pm, followed by a Masonic Service beginning at 3:00 pm. Burial will be private in the Fairview Cemetery, Rodman. Born August 3, 1924, son Clarence and Cora (Brown) Bibbins, he graduated from Adams Center High School. He worked on the family farm in Tylerville and following the death of his father, he took over the farm. He retired from farming in 1960. He worked for Dick Allen installing bulk milk tanks and with Lou Blair doing electrical work. In 1967 he went to work at the Samaritan Medical Center in the maintenance department, retiring in 1989. George married Beverly Greene of Rodman on October 12, 1946 with Rev. John Wetzell officiating. Beverly died July 18, 2018. He is survived by a son George (Christine) Bibbins, Rodman; daughter Karen Leeson, Philadelphia, NY; grandchildren Cara (Chad) Frederick, Aimee Bibbins, Brett (Amy) Leeson, great grandchildren Brock Frederick and Kyle and Whitney Grover, niece Nancy Kampnich and her children and their spouses and grandchildren. He is predeceased by his wife Beverly, grandson Stennett Leeson, sister Eleanor Daynard, a brother Lloyd Bibbins, and son in law Mark Leeson. George was a current member of the Rising Light Lodge #506 and a member of the Emmanuel Congregational Church, Watertown. He was a 62 year member of the Masonic Lodge, Secretary and past Master of the Rodman Masonic Lodge F&AM, and District Deputy Grand Master of the Jefferson District. He also was a past Patron of Rodman Eastern Star and past District Grand Lecturer of the Jefferson District. George was a “Sage” of the Tug Hill Commission, and a former Supervisor and Town Justice of the town of Pinckney. He enjoyed their camp at Cranberry Lake that he helped build when he was 12 years old and they spent their summers there following his retirement. Donations in his memory may be made to the Samaritan Keep Resident Activity Fund, 133 Pratt St, Watertown, NY 13601 or the Lewis County Public Health Home Health Service, 7785 N. State St, Lowville, NY 13367 or the Rising Light Lodge #506, ℅ Dan Bernat, 12042 Joslyn Rd., Mannsville, NY 13661. Online condolences may be made at www.piddockfuneralhome.com