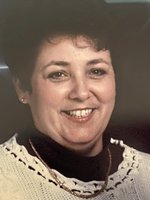 Cecil Marie Rogers, 74 of Ellisburg, NY, passed away at home on September 22, 2020 of natural causes.  She was born on March 29, 1946 and was the daughter and youngest of sixteen children to Myron and Dorothy Rogers of Ellisburg, NY.   Cecil attended the Union Academy of Belleville in Belleville, NY.  She worked in various manufacturing jobs until settling into her favored position as a Cafeteria Assistant at the South Jefferson High School in Adams, NY, where she spent over 15 years working at the high school until retiring in early 2020.  She was well known at South Jeff High School for her witty sense of humor, her ability to make everyone laugh, and her illustrious baked goods that she shared on many occasions.   Cecil married John C. Rogers, also of Ellisburg, NY on January 11, 1969, and remained married until her passing.  Together they have three grown children: son Robert Rogers (wife Elaine Rogers) of Mannsville, NY, son Jody Rogers (wife Tricia Rogers) of Birmingham, AL, and daughter Trena Rogers Houston (husband Sanchez Houston) of Troutman, NC.   Cecil was a VERY proud, dedicated, and protective grandmother to her four grandchildren: Dalton, Dustin, Austen, and Miya.   She is also survived by two sisters Alice Riley (husband Eddie), Arline Patterson, and her two brothers Howard “Zip” Rogers (wife Mary) and James Rogers (wife Cyndie) and many, many nieces and nephews.    Cecil also leaves behind her beloved cat “Tigger”, who meant the absolute world to her. It was her wishes not to have any public services. A private burial will be in the Rural Cemetery, Adams, NY.   Arrangements are with the Piddock Funeral Home Inc., Adams,  Condolences may be made at www.piddockfuneralhome.com.