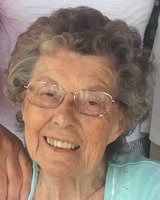 Alfreda M. Hull, long time resident of Adams Center and later Daytona Beach, FL, entered eternal life on November 1, 2020, All Saints Day, at the age of 94 at Carthage Center for Rehabilitation and Nursing, Carthage, NY where she had been a resident since 2016.  A private burial will be in the Union Cemetery in Adams Center, NY.  A memorial service is planned for family and friends in the summer of 2021 in Adams Center, NY when Alfreda’s wishes can be granted to let people celebrate her life, her faith and most importantly toast her with a nice hot cup of coffee.  Arrangements are with the Piddock Funeral Home Inc, Adams, NY. Alfreda was born and raised on Dry Hill September 4, 1926, the daughter of Laurence and Mildred (Parker) Maltby.  She graduated from Adams Center High School in 1944,   and from the Practical Nursing School at Delhi Ag and Tech (SUNY Delhi) in 1947.  Alfreda married Richard L. Shippee on September 5, 1948 at the Adams Center Baptist Church.  They lived on several dairy farms in Jefferson County prior to settling on the Greene Settlement Road in Adams Center in 1961. Richard died in 1989 and she later married Dale Hull of Apopka, Florida, in 1997.  Dale passed away in 2010.  Alfreda began her nursing career at the House of the Good Samaritan in Watertown shortly after finishing nursing school in 1947. She remained a loyal employee of the organization, including moving across the street to the Samaritan Keep Nursing Home in 1975 when it opened and she was the charge nurse on the 2nd floor until her retirement in 1993.  Early in her career she spent about ten years as a part-time private duty nurse for the family of State Senator Henry Wise.  Nursing was Alfreda’s passion, and calling in life, and anyone that ever encountered her would know that within minutes of meeting her.  She continued to care for many of her retired neighbors and fellow church members in Daytona Beach, Florida for years after she retired there in 1993.  Her commitment to the people she cared for, whether at work or out in the community as a volunteer and concerned neighbor, was recognized in 1987 as the Northern New York Community Foundation awarded her with their inaugural Humanitarian of the Year award.     She is survived by three children Darwin Shippee (Ann Marie) of Marietta, GA, Sherry Metzler (Charles) of Castorland, NY, David Shippee (Ann) of Clifton Park, NY and daughter in law, Carol McCormick of Jacksonville, FL, and a brother, Lavern Maltby.  She was also the recipient of much love and enjoyment from her eleven grandchildren, eighteen great grandchildren, seven great-great grandchildren as well as scores of nieces and nephews.  She is predeceased by her son Robert, who was killed in May of 1987 while serving his country aboard the USS Stark when it was struck by an Iraqi missile in the Persian Gulf, a grandson Alexander Shippee who died in 1995, and her three sisters, Sylvia Maltby, Belva Roberts and Beatrice Maltby.  Alfreda was a member and deaconess of the Adams Center Seventh Day Baptist Church for many years until she retired to Daytona Beach and joined the Seventh Day Baptist Church there.  She also became involved in prison ministry in the Daytona Beach area.  For several decades, Alfreda served as a volunteer nurse and cook for summer youth church camp where she got to share her nursing passion and her faith.   The family would like to thank the staff of the Carthage Center for Rehabilitation and Nursing for their patience, caring and tolerance with Alfreda’s nursing advice along with the colorful language she adopted in the last few years of her life.  Donations may be made in Alfreda’s memory to Hospice of Jefferson County, 1398 Gotham St., Watertown, NY 13601 or the Alzheimer’s Association of Central New York.   Condolences may be made at www.piddockfuneralhome.com