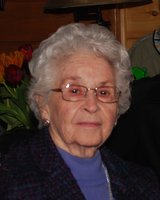 Adams - Betty J. Reynolds, 97, passed away on January 4, 2021 at the Samaritan Medical Center, in Watertown, NY after a brief illness, with her daughter, Deborah Langworthy at her bedside. A private family-only service will be held at the Piddock Funeral Home, Adams, (COVID-19 restrictions) on Saturday, January 9, 2021. A graveside service and interment will be in the Ellisburg Cemetery, Ellisburg, NY in the Spring, when we can all gather safely and remember Betty. Arrangements are with the Piddock Funeral Home Inc, Adams, NY. Betty had been able to live in her own home in Adams, NY with the assistance of care-givers, Linda Bender, Sharon Tiller, Dawn Smith and her daughter right up to when she went to the hospital. The family is very appreciative for the care and kindness shown to Betty by these special care providers. Betty was born on February 21, 1923 in Sandy Creek, NY to Harris A. and Dorothy Wilcox Pitkin. She attended and graduated from Mannsville Manor School in 1941. In the following year, on January 17, 1942, Betty married her life-long love, Harold Reynolds, in Zion Episcopal Church in Pierrepont Manor, NY with the Rev. William Foreman officiating. Betty was employed as a dental assistant, first in the office of Dr. Harry Richmond from 1942 - 1944 and then in the office of Dr. William Freeman from 1959 -1982. In between her professional career times Betty had two children, David H. and Deborah K., using the time from work to raise her family. After retirement, Betty and Harold enjoyed traveling and spending time at their favorite summer spot, Clear Lake, near Plessis NY. Their time together ended in 1998 when Harold passed away unexpectedly after 56 years of marriage. Besides her love for Harold, Betty had a great love for the outdoors particularly creating and working in her flower gardens. She also had an interest in bird-watching and though she was always looking for any rare birds in her travels, she quickly learned of the many species of birds that made their home in Adams and began enticing them to visit her home by launching a feeding program in her side yard. She was in her glory when she would be on her knees in her flower garden and a bright red cardinal would visit one of her many feeders or was sitting watching the chickadees from her kitchen window on a winter day. She will certainly be missed by her feathered friends. When the seasons forced Betty inside the house, she usually could be found with a book in her hand. She was an avid reader and often escaped to the many corners of the world through her books. Another season that enchanted her life was baseball season. She was a serious New York Mets fan and enjoyed watching and eventually listening to their games or just talking about their success (or lack of) each year. Betty was a mainstay member at Emmanuel Episcopal Church in Adams for over 60 yrs., teaching Sunday school, singing in the choir and being a long time member of the Women’s group that was known for many service projects including their annual Christmas bazaar. Betty had loved music from an early age and showed great talent. She participated in many school musical productions, both singing and playing the piano and was very active in the church music programs. Deborah still recounts the many sing-alongs they would have at home with Betty playing her piano. She is survived by her daughter, Deborah Langworthy (David), six grandchildren: Gregory Bouchard (Kim), Joel Bouchard, Todd Reynolds (Melissa), Adam Reynolds (Jamie), Kirk Langworthy (Hilary) and Luke Langworthy (Katie); along with 10 great-grandchildren. Besides being predeceased by her parents and husband, Betty was predeceased by her son, David, and a grandson, Jason. Contributions in her memory may be made to the Emmanuel Episcopal Church, 39 E Church St, Adams, NY 13605 or the South Jefferson Rescue Squad, PO Box 126, Adams, NY 13605. The family would like to express their sincerest thanks and appreciation to Betty’s wonderful daily care-givers, the South Jefferson Rescue Squad personnel for their caring bedside manner and professionalism during the many rides that they provided Betty and the nurses and doctors on the Pavilion 4th floor, who were so kind and comforting to Betty during her final days and to Deborah as she was allowed to be by her side until her passing. Condolences may be made at www.piddockfuneralhome.com