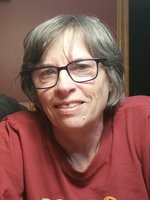 Rea Jean Simpson, 62, passed away Monday January 18, 2021 at her home in Watertown where she had been under the care of her husband, family and Hospice of Jefferson County. Calling hours will be Tuesday January 26 from 5:00 - 7:00 pm with prayers beginning at 7:00 pm, at the Piddock Funeral Home, Adams. Burial will be private. Arrangements are with the Piddock Funeral Home Inc, Adams, NY. Rea was born October 19, 1958 in Watertown, NY, the daughter of the Roy and Jean (Wheeler) Simpson. Following her graduation from South Jefferson Central School in 1976, she attended Clarkson University graduating in 1980 with a degree in Electrical Engineering, then later received her masters degree from University of California, Davis in1985. She worked as a computer scientist at Lawrence Livermore National Laboratory in Livermore, CA from 1983 until her retirement in 2018. She married Michael J. Miller on February 13, 1999 in Honolulu Hawaii. Rea lived most of her adult life in California. Following her retirement, the couple moved to a beautiful home in Washington with a view of Mount Hood. After she became ill, they moved to Watertown to be close to her family and her many childhood friends. Rea had a love for the bands Phish and the Grateful Dead. Together they attended hundreds of concerts throughout the country. At the time of her passing, Phish was playing in the background. She was an avid collector of Wee Forest Folk and helped organize numerous yearly gatherings for other collectors across the county. Rea is survived by her husband Mike Miller, Watertown; two brothers and their wives Buzzy and Amy Simpson, Rodman, Robert and Pat Simpson, Adams; several nephews and a niece, Keegan, James and Heidi Simpson, and Rob and Joe Simpson. She is predeceased by her parents Roy and Jean (Wheeler) Simpson, a niece Teresa Simpson, and a close family friend Edna “Tootie” Berry. The family would like to extend our heartfelt thanks to In Home Senior Assistance Caregivers for the love, care, and compassion they gave Rea during her illness. Donations in her memory may be made to Creutzfeldt-Jakob Disease Foundation, 3634 W. Market St., Suite 110, Akron, OH, 44333 or online at www.cjdfoundation.org Condolences may be made at www.piddockfuneralhome.com