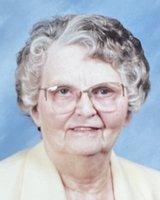 Margaret K. Smith, 96, a lifetime resident of Adams, passed away Thursday, June 17, at Samaritan Summit Village, where she had resided since November 2019. Her funeral service will be 11:00 a.m. Friday, June 25, at Emmanuel Episcopal Church, 40 East Church Street, Adams, with the Rev. Jerry Wichelns, officiating. A calling hour will precede the funeral beginning at 10:00 a.m. Burial will be in Rural Cemetery. Arrangements are with the Piddock Funeral Home, Inc., Adams, New York. Born February 23, 1925, to Leonard T. and Mabel A. (Froome) Cowen, Margaret graduated from Adams High School in 1943. She married Carmon S. Smith of Delta, Missouri, April 25, 1952, at Grace Episcopal Church, Carthage, with the Rev. Donald C. Schneider officiating. Mr. Smith died February 25, 1991. She had been employed at Watertown National Bank and Belloff’s Department Store, Adams, and also assisted her husband with his business, the Adams Meat Company. Margaret is survived by her daughter and son-in-law, Sally and Ronald Jerome, Adams Center; daughter-in-law, Diane Smith, Raleigh, North Carolina; grandchildren Joseph and Kristi Jerome, Watertown, Jonathan and Rebecca Jerome, Adams, and Leah Smith, Raleigh, North Carolina; and great-grandchildren Merrick, Lukas, Mia, and Blair Jerome. Besides her parents and her husband, she is predeceased by her son, Michael Smith, and her sister, Dorothy Drake. Margaret, also known as Maggie, Mom, Gram, and GG, loved to laugh and make others laugh. She loved looking at pictures of her family. She loved to have visitors and chat on the telephone and would be sure to tell everyone who either stopped by or called “You’ve made my day!” and “Thanks for being you!” She loved life. Margaret was a member of Emmanuel Episcopal Church and Cecelia Chapter #156 of the Order of the Eastern Star. Donations in her memory may be made to Emmanuel Episcopal Church, PO Box 29, Adams, New York 13605. Condolences may be made online at www.piddockfuneralhome.com