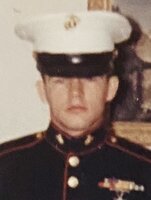 Donald A. Wilson, 73, of Adams, died Saturday September 11, 2021 at the home of his sister Maryanne Monica, where he had been under the care of his family and Hospice of Jefferson County, Watertown, NY. A memorial service will be 3:00 pm Friday September 17 at the Piddock Funeral Home, Adams. Burial will be private at a later time. There are no calling hours. Arrangements are with the Piddock Funeral Home Inc, Adams, NY. Born March 12, 1948 in Sandy Creek, he was the son of Warren and Orrissa (Berry) Wilson. In 1964 he entered the US Marine Corp where he served two tours in Vietnam and Korea, receiving a Purple Heart. Following his discharged in 1968, he worked at the New York Air Brake Foundry,Watertown and later leased and operated the Sunoco Garage and Fuel Station in Adams. He also was employed by the Watertown Daily Times Newspaper in Watertown where he was in charge of organizing delivery of the daily newspapers. Don is survived by two sons Clifford Wilson, Oregon, Donald Wilson, Adams; two step- grandchildren; a brother Raymond Sprague, Lorraine; five sisters Nellie Williams, Adams, Maryanne Monica (and companion Alvin Roe), Adams, Brenda (Jim) Lee, Chaumont, Delta (Roland) Kampnich, Croghan, Donna (Jonas) Hobbs, Mannsville; several nieces, nephews, great nieces and nephews, and great-great nieces and nephews. He is predeceased by a brother Kenneth Wilson and two sisters Rose Marie Sheldon, Wanda Baltz. Don enjoyed working on cars and fishing. Donations in his memory may be made to Hospice of Jefferson County, 1398 Gotham Street, Watertown, NY 13601. Condolences may be made at www.piddockfuneralhome.com