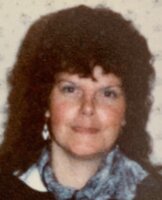 Sheila I. Tousley, 76, longtime resident of Adams, died Friday Sept. 24, 2021 at Hospice of Jefferson County, Watertown, NY. Her funeral service will be 2:30 pm Tuesday Sept. 28 at the Piddock Funeral Home in Adams, with Brian Snyder, pastor of the Sandy Creek United Wesleyan Church officiating. Calling hours will begin at 1:00 pm prior to the service. Burial will be private at a later time. The family would like to invite all that knew Sheila to a celebration of her life following the funeral service, at the American Legion Don Rounds Post 583, Adams, NY. Arrangements are with the Piddock Funeral Home Inc, Adams, NY. Sheila was born March 13, 1945 in Syracuse, NY, daughter of Wesley and Agnes (Ridgeway) Tyfair. She graduated from Sandy Creek High School. Following school she worked for Bass Livestock in Watertown for several years. She married Marshal Tousley December 23, 1961 at the Emmanuel Episcopal Church, Adams. The couple have lived on the Comstock Road in Adams all their married life where they owned and operated a dairy farm for 33 years. Shelia retired in 1985 due to disability. She is survived by her husband Marshal, Adams; two sons Mark (John Michael) Tousley, Brewerton, Scott Tousley Sr, Adams; five grandchildren, many great grandchildren; one brother Robert Tyfair, Sandy Creek; two sisters Sharon (Albert) Johnston, Sandy Creek, Janice (Dennis) Dunbar, Syracuse; and several nieces and nephews. She is predeceased by a son Shawn, who died Nov 3, 2005; a brother Craig Tyfair and a sister in law Margie Tyfair. Sheila was a member of the Sandy Creek VFW Auxiliary. She enjoyed all kinds of crafting that included woodcraft, painting and ceramics. Donations in her memory may be made to Hospice of Jefferson County, 1398 Gotham Street, Watertown, NY 13601. Condolences may be made at www.piddockfuneralhome.com