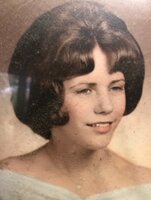 Gloria I. Knapp, 72, of Watertown, died Sunday October 3, 2021 at home where she had been under the care of her family and Hospice of Jefferson County. There are no public services. Arrangements are with the Piddock Funeral Home Inc, Adams, NY. Born September 20, 1949 in Watertown, daughter of Donald A. and Mary (Geneva Robinson) Hall, she graduated from South Jefferson Central School. She married Ralph W, Knapp on July 20, 1968 in the Honeyville Baptist Church. The couple lived locally for several years before moving to their current home in Watertown. Gloria worked for the town of Watertown as a clerk, then later went to work as Deputy County Clerk in the Jefferson County Clerk’s Office, Watertown, retiring after twenty seven years. Surviving is her husband Ralph, Watertown; a son Paul Knapp (and Wendy Horton), Watertown; three grandsons, Gaige, Logan and Mason Knapp; one brother Bruce Hall, Pulaski; one sister June Pickert, Theresa; and several nieces and nephews. She is predeceased by her parents, and several brothers and sisters. She enjoyed traveling, visiting casinos, and especially spending time with her grand-children. Donations in her memory may be made to Hospice of Jefferson County, 1398 Gotham Street, Watertown, NY 13601. Condolences may be made at www.piddockfuneralhome.com