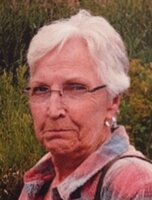 Mona M. Filkins, 83, longtime resident of Adams, died Thursday December 30, 2021 at Samaritan Keep Home, Watertown, where she had resided since March 2020. It was her wish to be cremated with no services. Arrangements are with the Piddock Funeral Home Inc, Adams, NY. Mona was born December 27, 1938 in Adams, daughter of James and Violet (Moore) Morrow. Following her graduation from Adams High School in 1956, she married Richard Filkins, of N. Syracuse, and worked as a teller, then bank officer at National Bank Adams, and Key Bank, Watertown. They divorced in 1974. He died in 2006. She retired in the mid 90s after various accounting positions for Jefferson County, Premoid Corporation and Marine Midland/Community Bank. She also worked in retail and was the owner of “Lucy’s Fashion Shop” in Adams, during the 1980’s. Mona had a great sense of humor and loved a good joke. Several years ago, when she was making funeral arrangements, her daughter asked if she wanted any donations made in her memory. She replied “yes, ask for donations to the National Sarcasm Society”. She is survived by her daughter Kris Filkins, Easley, SC; a son Kelly Filkins, Adams Center, NY; a nephew, and several grand and great grandchildren. She is also survived by sister in law, Audrey Morrow of Port Clinton, Ohio, and her longtime friend Connie Elliott, Adams, NY. She is predeceased by a brother, a grandson and a nephew. Condolences may be made at www.piddockfuneralhome.com