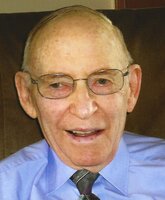 Gerry M. McIntosh, 89, longtime resident of Adams Center, died Tuesday April 26, 2022 at Saint Joseph’s Hospital in Syracuse. Calling hours Gerry and his wife Norene, who died at their home in LaFargeville on September 8, 2020, are 3:00 - 6:00 pm Sunday May 1st at the Piddock Funeral Home, Adams. Funeral services for Gerry and Norene will be at 11:00 am Monday at the Honeyville Baptist Church, Adams Center with Al Dowker, pastor, officiating. Burial will follow for both in the Adams State Road Cemetery, Adams Center. Arrangements are with the Piddock Funeral Home Inc, Adams, NY. Born December 1, 1932 in Smithville, son of Morris and Louise (Herold) McIntosh, he graduated from Adams Center High School in 1951. Following school he worked as a dairy farm hand in Oneida for two years. He married Norene Bartlett at the Stockbridge Methodist Church, Munnsville, NY, on August 22, 1953. The couple owned and operated a dairy farm, Windsong Lane Farms on Dry Hill for 53 years, retiring in 2009 and moving to LaFargeville near their daughter. They shared 67 years together. He is survived by two daughters Peggy (Tom) Halsey, Mexico, NY, Janet (Lee) Klock, LaFargeville, NY; one daughter in law Teresa McIntosh, Adams Center; eight grandchildren, eleven great grandchildren; one brother Perry (Donna) McIntosh, Adams Center; one sister in law Phyllis McIntosh, Adams; and several nieces and nephews. He is predeceased by two sons, Scott McIntosh who died at birth and Guy A. McIntosh who died September 5, 2021; three brothers Roy (and wife Jane) McIntosh, David McIntosh, Keith (and wife Jane) McIntosh; one sister Virginia (and husband Larry) Smith; and a niece Roena McIntosh. Both he and his wife were longtime members of the Honeyville Baptist Church, where he was a deacon and they each held several offices. They also participated with the Evangelical Lutheran Church at Orleans Four Corners and Agape House Fellowship, both in LaFargeville. Gerry loved farming. He thought of it as not a job, but a lifestyle. He also enjoyed square and round dancing, bowling, playing Dominoes, traveling, singing and church activities. The family would like to give a special thanks to longtime friend and caregiver Brenda Merrill, as well as the many other special caregivers over the past several years that showed their kindness and support. Donations in his memory may be made to the Honeyville Baptist Church, 13210 Fuller Road, Adams Center, NY 13606 or the American Cancer Society. PO Box 22478 Oklahoma City, OK 73123. Condolences may be made at www.piddockfuneralhome.com