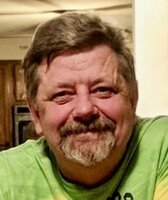 Steven D. Freeman of Adams, NY passed away unexpectedly at the age of 62 in his home on June 14, 2022. Steve was born on August 13, 1959, to parents Herbert M. Freeman and Francis Symonds. Steve, or “Stevie" as he was known to his close friends and family, had several brothers and sisters as well as many nieces and nephews. Even though he did not have any children of his own, he was a beloved bonus dad to Josh, Alexis, Kortney, and Trevor and spent as much time as possible with his grandchildren, Lily and Tucker. Steve was a fun-loving hippie who always rocked a tie-dyed t-shirt. He enjoyed watching wrestling and listening to classic and hard rock music. He was a staple in the Applebee's family for over 15 years and loved his work family. He leaves behind many wonderful fun-filled memories, as he would always do whatever he could to make everyone around him laugh. There are no funeral services at this time. Arrangements are with the Piddock Funeral Home Inc, Adams, NY. Condolences may be made at www.piddockfuneralhome.com