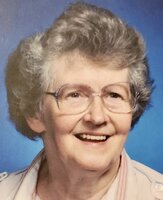 Evelyn V. Crast, 93, formerly of Adams, passed away October 17, 2022 at the Sunnyside Care Center in E. Syracuse, where she had been a resident for several years. Born March 2, 1929, she was the daughter of Kenneth and Emily VanWormer. Evelyn grew up on the family farm 5 miles outside Mannsville, NY. As a young girl she drove a team of mules and told about riding to school in a horse drawn sleigh during the winter. Evelyn, fondly known as “Dutch”, was a graduate of Mannsville-Manor Central School. She had been married to the late Jack L. Crast, formerly of Sandy Creek. Evelyn was employed as a switchboard operator for General Telephone (GTE) and Contel, and later at the House of the Good Samaritan prior to her retirement. Evelyn was a member of the Adams United Methodist Church; she enjoyed reading and tending her yard; she baked great chocolate chip cookies and lemon pie. She valued family, looking forward to gatherings and maintaining contact with those family members near and far. Evelyn was predeceased by daughter Carolyn Crast; sisters Charlotte Salisbury and Nettie Hale; and brother David VanWormer. She is survived by children Jack (Denise) Crast, Kenneth (Susan) Crast, and Karen (Michael) Russell; brother Kenneth VanWormer, Jr.; granddaughter Emily Crast; step-grandchildren Shannon Flathers and Lindsey Briggs; 5 step-great-grandchildren; multiple nieces, nephews, extended family members, and friends. There will be no calling hours or funeral; burial will be private. She will be laid to rest in the Maplewood Cemetery in Mannsville along side her parents and daughter Carolyn. Arrangements are with the Piddock Funeral Home, Inc., Adams.