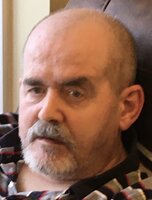 John David “Jack” Pierce, 70, formerly of Adams, passed away peacefully in his sleep at Samaritan Summit Village on December 12, 2022 after a brief illness. John was born, along with his fraternal twin brother, on Valentine’s Day 1952 to Frank Matthew and Betty June (Ruttan) Pierce.   He worked for Benny’s Steak House for over 30 years before retiring.  He was a dedicated employee who was loved by the staff. He loved to ride his bike and feed the birds and squirrels.  He lived with his mother in Adams until he entered the Summit Village Assisted Living Facility.  He really loved the independence of living on his own there, but as his health declined he was moved to Skilled Nursing where he was very well cared for. The staff at Summit Village enjoyed visiting with John on a daily basis as he was always ready to share a bit of news that he had seen on TV or discuss the weather or politics.  He enjoyed shows about mysteries, ghosts and hauntings.  He loved animals and listening to all kinds of music. John is survived by his fraternal twin brother and sister-in-law, James and Penny Pierce of Adams.  He was predeceased by his father and mother, as well as his older brother and sister, Frank Pierce, Jr and Sheila Pierce Patterson.    There will be no funeral or calling hours.  Arrangements are with the Piddock Funeral Home Inc, Adams, NY. Donations can be made in John’s name to the JRC Foundation / ARC Jefferson – St Lawrence or the Jefferson County SPCA.  Condolences may be made at www.piddockfuneralhome.com