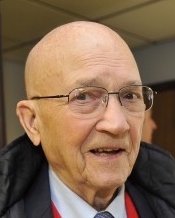 Obituary of Chester A. Brown

Chester A. Brown, 90, longtime resident of Adams, died Monday evening September 4, 2017, surrounded by his loving family at Hospice of Jefferson County, Watertown.  Calling hours will be 6:00-8:00 pm Thursday at the Piddock Funeral Home, Adams.  Funeral service will be 11:00 am Friday at the Emmanuel Episcopal Church, Adams, with Rev. Jerry Wichelns officiating.  Burial will follow with military honors in the Elmwood Cemetery, Adams.

Born March 18, 1927 in Ellisburg, son of Glenn A. and Bertha (Symes) Brown, he was educated locally.  He entered the United States Navy March 1944, serving on the USS LCS (L) 99 as an electrical engineer.  He was honorably discharged in March 1946.

Chet married Shirley M. Vorce of Henderson at the home of his parents on September 7, 1946.  The couple lived in Adams their entire married life.  He owned and operated Brown’s TV in Adams for many years, eventually retiring from the TV business.

Chet proudly owned three small airplanes that he enjoyed piloting around New York State.  He was also an avid photographer, wood worker and a fan of the New York Yankees.

Share Your Memory of
Chester
Upload Your Memory View All Memories
Be the first to upload a memory!
Share A Memory
Send Flowers
Plant a Tree