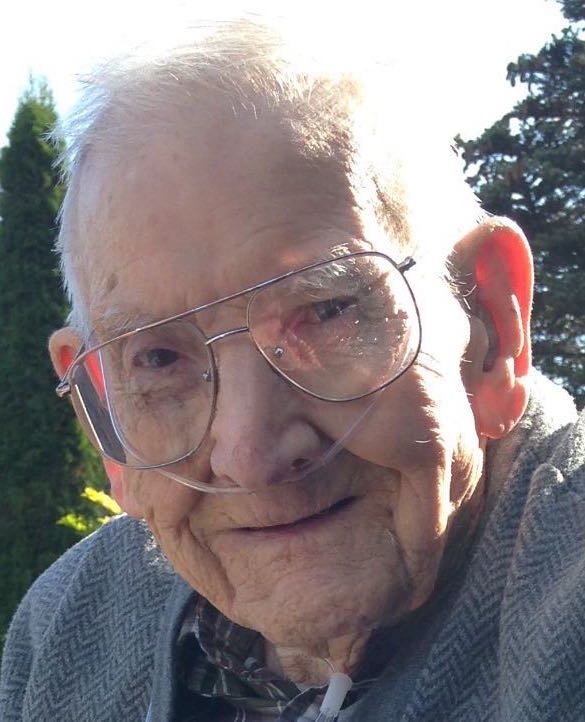 A memorial mass will be at 11:00 am Monday at Saint Cecilia’s Church, Adams, with Rev. Martin  Cline officiating.  Burial will take place in the spring in the Woodlawn Cemetery, Sandy Creek.

Born August 22, 1921 in Copenhagen, son of William J. and Mae (Florida) Kehoe, he attended Copenhagen High School, graduating in 1939.  Following graduation he worked at Stone & Webster Engineering, traveling to many locations and worked in their construction offices for 3 years.  He then worked at Blount Lumber Company in Lacona, retiring after 40 years.

During this time, he also owned and operated a small dairy farm in Sandy Creek from 1955-1995.

He married Elsie Louise Hand, of Pittsfield, MA in 1941.  The couple lived in Sandy Creek following their marriage.  They had been married for fifty-two years at the time of Mrs. Kehoe's death in 1993.

Floyd later moved to Adams Center where he lived before entering The Manor at Seneca Hill.

Floyd enjoyed gardening, playing cards and dancing, where he was a member of the Watertown Senior’s Dance Club.  He was also a life member of the Black River Fiddlers, which he was extremely proud of.

The family would like to give special thanks to the excellent care and attention he received while he was a resident at The Manor at Seneca Hill.

Floyd loved animals and had requested upon his passing, donations in his memory be made to any local animal shelter.

Share Your Memory of
Floyd
Upload Your Memory View All Memories
Be the first to upload a memory!
Share A Memory
Send Flowers
Plant a Tree