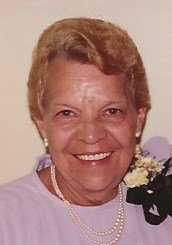 Mrs. Dwyer was born June 29, 1929 in the town of Adams, daughter of Chester and Alice (Nichols) Overton,. She attended Adams Center High School following which she worked at the former Modern Homes Plant for 15 years.  She later worked at the South Jefferson Central School Wilson Building cafeteria department and then to BOCES in Watertown as a teacher’s aide, retiring after 28 years.

Margaret married Ronald H. Dwyer of Clayton on December 20, 1947 in the Belleville Methodist parsonage, with Rev. Miles Hutchinson officiating.  Following their marriage the couple lived in Ellisburg, Smithville and Adams Center. They owned and operated a farm on the South Harbor Road in Adams Center.  Mr. Dwyer died on June 21,2015. Shortly after his death Margaret moved to Summit Village and in December, 2015 entered the Samaritan Keep Home.

Donations in her memory may be made to the Smithville Fire Department c/o Cindy Griffith, 14328 Overton Rd., Adams Center, NY 13606

Share Your Memory of
Margaret
Upload Your Memory View All Memories
Be the first to upload a memory!
Share A Memory
Send Flowers
Plant a Tree