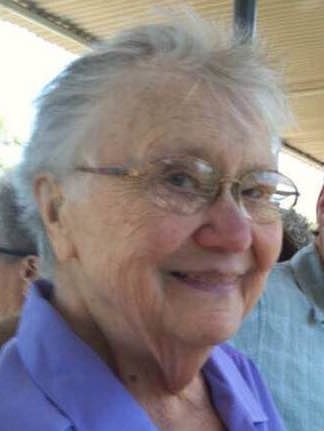 Obituary of Mary A. Greer

Mary A. Greer, 96, formerly of Henderson and Saratoga  Springs, died Tuesday August 27, 2019 at Samaritan Keep Home, Watertown, NY.  Her funeral service will be 10:00 am Tuesday September 3 at the Piddock Funeral Home, Adams, NY.  Burial will follow in the Maplewood Cemetery, Mannsville, NY.  Calling hours will be from 1:00 - 5:00 pm Monday September 2 at the funeral home.

Mary was born January 13, 1923 in Syracuse, NY, daughter of Charles E. and Edith M. (VanEpps) Beeman.  She graduated from Blodgett Vocational High School, Syracuse.  She was a switchboard operator for Syracuse Transit.

She married Richard A. Greer Sr. April 1941.  The couple lived in Syracuse and Weedsport, NY.

Mary moved to Henderson in 1954 and later to Clifton Park.  In 1972 she moved to Saratoga Springs where she worked as a security dispatcher at Skidmore College.  She lived there until 2008 when she moved to Richmond VA.  In 2011 she moved to Dallas TX and then in 2017 she moved to the Samaritan Keep Home in Watertown.

She is predeceased by her sister Beatrice Beeman.

Donations in her memory may be made to the SPCA Estherville Animal Shelter, 100 Russell Road, Greenfield Center, NY 12833 or the Mannsville Methodist Church, Mannsville, NY 13661.

Share Your Memory of
Mary
Upload Your Memory View All Memories
Be the first to upload a memory!
Share A Memory
Send Flowers
Plant a Tree